Dam and sire of litter B: Elza and Barcham 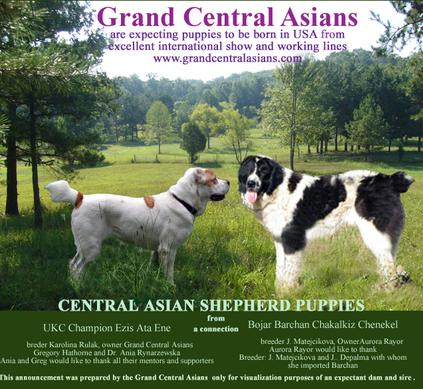 Alittle information about Barchan x Elza litter and the rationale behind this pairing.

We first became interested in Barchan as a potential stud dog in 2012. In January 2012, we contacted his owner, Aurora Reyor, to acquire more information about him. We stated our interest in him as a potential stud. His owner was very kind to share his pedigree with us, ever since we have researched his lines to the extent that was possible to us.  In 2012 we thought he would be a good potential sire  but until recently we were unsure if logistics would allow him to sire Elza's litter. We really wanted to wait until he was proven (that is had other litters). However, due to timing and circumstance this did not occur but because of our investigation into Barchan and his pedigree we were confident that the pairing with Elza would produce very nice pups. Upon contacting Ms. Reyor and exchanging additional information about the dogs, their structure, health, and temperament, we decided to proceed with this breeding.

For this breeding we particularly focus on temperament. Barchan is a working dog. He lives and works in Alaska guarding livestock. He is calm and confident. We were told by his owner that when he appears in the room or enters an area he carries himself with great presence.

Elza is the pillar of our pack. She is the Queen without a doubt. She is a very serious but stable female. We were showing her all the way until Fall 2014. She finished her UKC Championship  and ended 2014 ranked #6 on the UKC Top 10 in the breed (please see here). She is a dual purpose dog. She has been introduced to livestock as an adult dog and has not had any setbacks so far. She has been one of our estate guardians since a very young age. When we have friends over, we can introduce her to them without a problem. She may not fall in love with them immediately, but given a chance, she will warm up. She tolerates public events organized by the local kennel club. In November, 2015 Elza has passed a temperament test by the American Temperament Test Society, the only non-profit organization that offers "TT" (temperament tested) title to the dogs.

It took us four years to decide to breed her. We watched her grow and mature. We wanted to make sure that she is exactly the temperament we want in a CAS after her maturation. At 4 years of age, as a mature female dog, her temperament is exactly what we are hoping to preserve.  It was not easy to find her a mate that would compliment her well. In addition to Barchan, we have had several international prospects in mind. We consider ourselves very fortunate that, with help of his owner, we were able to make this breeding happen. Logistically speaking it was not an easy task. It certainly makes this breeding one of a kind in our eyes.

We hope for moderate temperament in their puppies. Though we are prepared for a range of temperaments, one thing we do know is that they will be confident and stable dogs. We  hope for a litter of wonderful guardians (livestock and personal) with some being show prospects.

In terms of structure, we believe that, given their ancestors, Elza and Barchan should have very nice puppies. We expect puppies to have strong bone, moderate angualation, and nice size, ideal for the work the breed was intended to do (read more about the breed here and here). We cannot wait for this litter to be born.

Below you can see pictures of some of their ancestors. We were able to find their ancestors from many many generations ago (more than 10 generations). Please take the journey into the past with these images that we collected. we believe that they are correct to the best of our knowledge. As always, if you have any questions, please feel free to ask.

Below you can find information about our B Litter.

This mating was between our UKC Champion, Elza. Elza was bred to Bojar Barchan Chakalkiz Chenekel. The breeding took place via surgical insemination (due to distance involved) using frozen semen.

Elza (UKC CH Ezis Ata Ene) was imported from Poland. She is a dual purpose guardian dog currently being transitioned to a full time LGD. Elza is mature, calm but serious and very loyal.

Barchan is a full time LGD with excellent instincts. He is calm and confident. Elza and Barchan compliment each other in terms of temperament and structure.  Elza lives in Georgia, USA while Barchan lives in Alaska, USA. Elza is owned by Grand Central Asians, imported from Poland. Barchan is owned by Aurora Reyor, imported from Slovakia. We are expecting that puppies will be balanced in terms of structure and temperament.

FYI. Average temperatures in Georgia in July are in the 90 degrees F, while Alaska can get as cold as -30 to -60 F in the winter. CAS are highly adaptable to variety of temperatures.

The birth was not easy. They puppies were very large.

There were complications with birth. On Friday afternoon we went in to have Elza's checked by our awesome vet. Puppies were doing well and so was Elza. No sign of distress. Elza went into labor short after. A while later first boy was born. Several hours later, the second boy was born. Both were very active from birth. Elza's labor stopped. She showed no signs of distress. She was taking care of the babies... At this point, we checked her abdomen and felt one more puppy but it was not moving. We rushed to our vet (who has been very responsive to us the whole time). We did xrays that confirmed a huge pup that was left behind. We had to do a c-section to recover the puppy. When they went in (my husband was able to be there), they noticed that the pup was large. The sack has probably ruptured a while back. Since Elza showed no signs of distress there was no way of knowing. There was no way we could have saved this puppy. Luckily we checked her abdomen which led us to act promptly so we were able to save her. The complications associated with the remaining puppy has increased her risk of future serious complications. The safest route was to spay her. We are saddened by the fact that we had to spay her but since our dogs' health is our the greatest priority, this decision was a no-brainer. We are happy that were were able to react so fast and save our sweet Elza, now mother of two healthy and strong baby boys.

Please fill out an application or contact us if you are interested in one of our upcoming or future litters.

Click on image to enlarge... Grand Central Asians Litter B