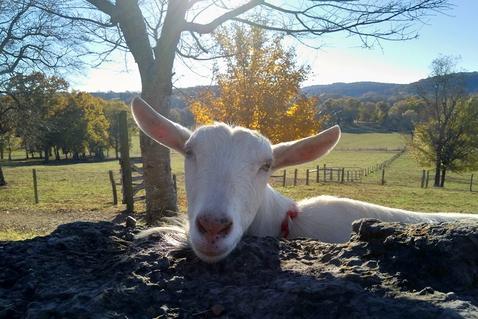 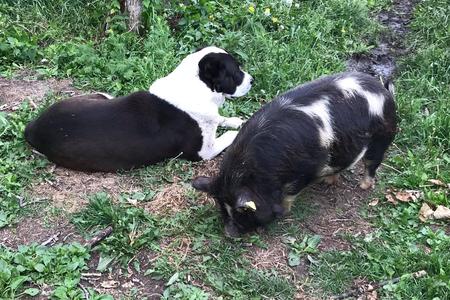 So how will you know that the CAS puppy that you are intending to purchase will succeed in its job? First, it is recommended that you choose a dog knowing the breed and its utilitarian values. These dogs were bred for their guardian abilities. This means, they will guard and protect. They are on the tougher spectrum of LGD breeds, with milder representatives possible, so knowing what to expect is critical. Dogs abandoned in shelters and dogs returned to breeders are often (though not always) the result of the buyer’s lack of understanding (or  willingness to learn) of the breed. In this case, the owner may feel that the dog does not exhibit suitable behavior for what the owner needs. This “unsuitable behavior” may be the result of inappropriate dog-owner matching, made more likely by the general change in the role of dogs, from working dog to companion animal, coupled with a strong tendency for modern owners and breeders to select dogs primarily on the basis of morphological, rather than behavioral, characteristics” (King, Marston & Bennet, 2012, Applied Animal Behavior Science).

We recommend that you purchase a dog from working parents or where you know puppies were raised (and evaluated) with livestock. We also recommend that you choose a breeder who attempts to match the puppy temperament with its owner and the function it is going to perform to minimize the likelihood of mismatch. Remember, though, that there is more to temperament than genetics.  Environment plays a role, as cited earlier. 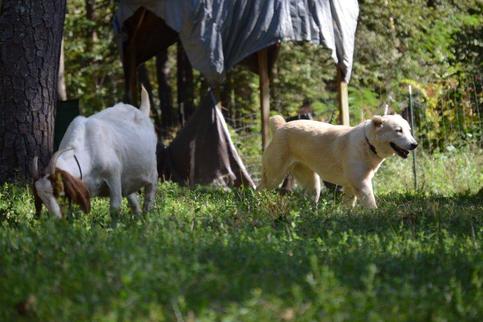 Some scientific evidence suggests that it is possible. For example, in an article published in Domestic Dog Behavior and Cognition journal, Serpell & Duffy (2014) concluded “that some breed-associated temperament traits (e.g. fear/anxiety) may be linked to specific gene mutations, while others may represent more general behavioral legacies of ‘ancient’ ancestry, physical deformity, and/or human selection for specific functional abilities.” This means that, even though you buy from non-working parents, you may get lucky and  get a dog that has the desired traits based on “ancient ancestry”. Unfortunately, the flip side of this may be that those characteristics, since not evaluated by the breeder of non-working dogs, may have been bred out. In other words, you do not know what to expect.   Puppies from working parents who exhibit appropriate, breed specific traits evaluated in their working capacity, are more likely to succeed in the future because they are likely to inherit those traits (since the traits were present in parents in the first place). This is because working parents have proven to exhibit certain characteristics that are a. representative of the breed, and b. utilitarian in nature, helping this dog to perform tasks as outlined by the breed standard. In the CAS, it means the ability to perform tasks of guarding livestock and, potentially, property and the people (hence dual purpose). 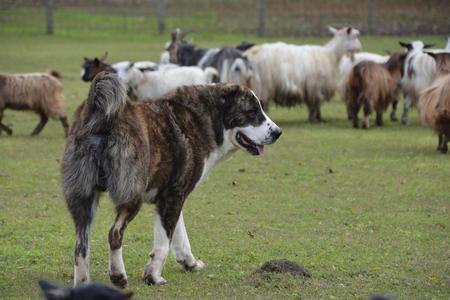 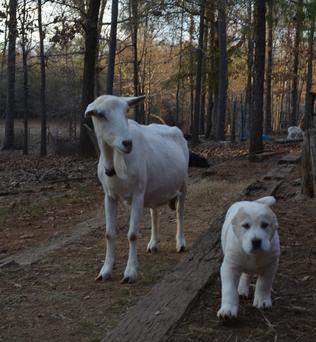 In summary, selection for utility is very important because temperament is in great part heritable. For LGDs, few traits are particularly important and include guarding instincts and bonding with their charges.  According to author of many famous books and articles on LGDs, Jan Dohner and co-author Cedric Giraud “It is very important to remember and keep in mind that the LGD breeds we value are livestock guardians first and foremost, and should be bred with a mentality that stresses bonding with stock. Any approach that ignores this over multiple generations will compromise what we can and should accept as a working LGD” (2018).

When purchasing puppy to be an LGD, your dog is more likely  (not guaranteed) to exhibit the correct traits if both parents are working and if the puppy was evaluated for its potential,.

Finally, even if you purchase a pup as a personal guardian or even pet guardian, remember that these dogs were bred to guard. In most instances, you cannot out-love or out-socialize these traits if dog was bred to exhibit them (mind you, this happened over 100s of years). At the same time, remember that temperament is both nature and nurture so while the breeder may have done everything in his or her power to breed dog that is correct for the breed, your job has just began.

I hope you will find this useful in your preparation or search for a pup.

According to “Genetics of Canine Behavior,” written by Houpt (2007) from American College of Veterinary Behaviorists, Animal Behavior Clinic, Department of Clinical Sciences, College of Veterinary Medicine, Cornell University, Ithaca, NY, USA canine “behavior is a result of nature (genetics) and nurture (learning or experience)”. The article further elaborates on breed differences that resulted in a generic division of dogs among different groups based on temperament and utility. For example, dogs are divided into hunting, herding, guarding and so on. These groups of dogs exhibit traits that are relevant to the particular group based on the utility. Traits such as pointing, nose use, search and retrieval are important in hunting dogs. Hunting dog, therefore, is not just a job title but more of a characteristic that is representative of a breed. This suggests heritability of certain traits, where “heritability is the proportion of variation of a trait that can be explained by genetics (Houpt, 2007).

Unfortunately, according to the article “Applied Animal Behavior Science”, as domestication of dogs progressed, breeding for beauty versus utility began dominating the practice of dog breeding (King, Marston, Bennett, 2012).  Because of the role certain traits play in  job responsibility of a dog (hunting, herding, guarding), there are benefits of identifying desirable behavioral characteristics that are breed specific that will enable breeding of not only beautiful but also utilitarian representatives of the breed.

Central Asian Shepherds (CAS) as Livestock Guardian Dogs (LGD) traditionally used to protect livestock but also people, dwellings and caravans have, historically, been considered livestock guardian dogs with dual purpose. Note that livestock guardian is still the first utility. This means that as a breed, CAS not only have to look a certain way (which makes them a breed), they have to act a certain way. Read about temperament characteristics and what to expect from CAS in another edition of our blog.

Because of heritability, Lorenz (1985) emphasized that the bloodline must be considered.  Choose a pup from good working parents rather than relying on the reputation of a particular breed, because differences in temperament between dogs of the same breed may be greater than those between LGDs of different breeds.

This is particularly true in Central Asian Shepherd dogs. In some instances, their ability to guard livestock has been bred out resulting in loss of breed specific characteristics. We have seen examples of CAS dogs being raised with livestock or living with livestock but who have proven to lack particular temperament related characteristics that are needed in a good, reliable LGD. This resulted in lower than needed patience levels and, eventually, mauling and subsequent death of livestock. Dogs who committed these crimes against the livestock they were supposed to protect came from non-working parents or failed working parents. Please know that these were not our dogs or dogs we bred.

We chose not to provide pictures of these graphic tragedies. Instead, here is a picture of our happy, well protected goat.​

In this blog, I would like to highlight the importance of selection for utility or job that the breed has been bred to perform: guarding livestock. The rationales behind this blog are as follows:

This article focuses on general expectations and relies on scientific, published findings associated with statistical majority.

This article does not focus on exceptions. 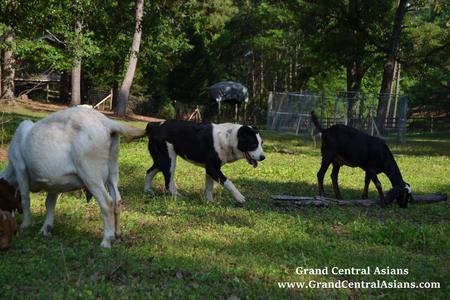 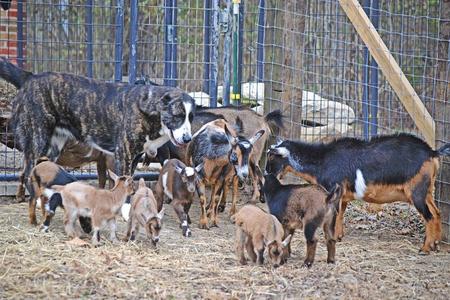